Depression is so common and complicated because it has so many potential contributors.  So here is the short version in order of prevalence with appropriate links if you feel they apply.  Note: more than one may apply. 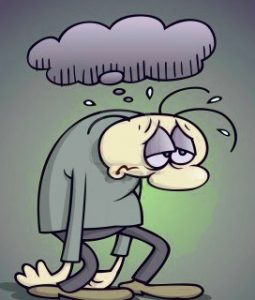 But first, the natural non-toxic go-to remedy to take in the mean time is SAMe (#1845-2) 2B, 2D.  SAMe is a naturally occurring molecule that is widely used in Europe for depression, arthritis and other ailments and it can be taken while on any prescription drugs for depression or anxiety.  If you are not yet on any meds, then you can do 5-HTP (#2806-4) 2B, 2D which raises serotonin levels.  These will make you feel better enough to actively dig into other health issues.  5-HTP breaks the downward spiral for people in pain that goes like this:  I feel bad all the time which makes me feel depressed and this depression just makes me feel so bad…which makes me more depressed….
Electro-medicine also offers some help.

1. A very common contributor to depression (and many endocrine imbalances) is liver dysfunction.  In Traditional Chinese Medicine, the mood is managed by the liver.  I concur and so do my clients. Nourishing the liver into proper function has done wonders to lift the heaviness people describe.   If the liver is involved, the person will often report problems with anger/rage.  Often this person was mistreated or violated as a child and if present circumstances are reminiscent of these past situations a welling up of heat and rage will result. These episodes damage the liver and psych drugs don’t repair the liver, duh, they make it more toxic.  You can do the gentle liver cleanse – a wonderful and general health preserving protocol or make an appointment to find a specific liver protocol.  The liver also conjugates (removes) excess hormones and converts the various thyroid hormones in just the right amount at the right time – if it is working properly.  Our hormones affect our moods.  Women with problems associated with estrogen dominance or longstanding PMS problems are likely in this category.

2.  A close second in causative factors is endocrine imbalance. Your endocrines include thyroid, adrenals and sex glands and your endocrines give you personality. These people struggle to be animated and usually report that they had periods of anxiety, followed by alternating anxiety and depression, then they fell into a hole that they didn’t even care to crawl out of. My clients taught me that nourishing the endocrines modulated some of the depressive side of manic-depression and cleansing the liver (above) modulated the manic side. These folks also report low energy in spurts initially then altogether as the imbalance is unaddressed. See if you fit the profile of any of the symptoms associated with endocrine imbalances and try the simple basic remedies. This is the major cause of depression in women and psych drugs don’t balance hormones, duh. A thyroid imbalance can cause depression in men and women and psych drugs don’t nourish the thyroid into proper function either.

3.  Good thoughts make good chemicals and good feelings.  Bad thoughts inhibit the release of our ‘feel good’ chemicals.   Yes, our thoughts affect chemicals within our bloodstream.  The way we think about ourselves and our environment, if negative, erodes our health.   At some point in my practice it became increasingly obvious that to help folks with their health, their thoughts had to be addressed.  So I wrote a self-help booklet, based on my experiences in that arena.  Psych drugs can numb the painful reality that your negative self-talk presents, but they numb everything else too.  And disconnecting from reality is not healthy.  Psych drugs don’t change your thoughts, only the Truth can.

4.  Subclinical heart dysfunction has been shown to be present with idiopathic depression.  That is, “There is no reason I should be unhappy, I’m so blessed but I’m so down all the time.”  Accompanying symptoms are shortness of breath and easily fatigued after very little effort.  There also may be a history of heart dysfunction in the family.  Try the recommendations here in the Blood Supply doc.

5.  Stress deranges digestion and digestive derangements are a major contributor to depression. These people often have some kind of pre-existing intestinal problem but report that their depression began with fatigue. Since we are fueled by our digestive tract, the resultant fatigue is a no-brainer. Know this also, that there are more serotonin receptor sites in your intestines than there are in your brain, so when your gut tissue is deranged, you do not feel good. Most people know this last factoid but often don’t relate it to their depression.  Before resorting to a pharmaceutical (all of which have the side effect of depression AND digestive upset – so you will wind up on more than one) you need to normalize digestive function first. This link gives you many kinds of derangements, from constipation to Crohn’s and natural approaches to address possible underlying causes. Or, you can make an appointment and we can address these more precisely, but at least read this material. This is a major cause of depression in men and psych drugs don’t improve digestion – they make it worse, duh.

Never go off an anti-depressant without supervision.

Antidepressants and Risk of Bone Fracture

A recent article in the Archives of Medicine (Vol. 167 No. 2. Jan. 22, 2007) reported that daily use of the most common antidepressants–SSRI’s– such as Prozac®, Zoloft®, Welbutron®, and others was found result in a 200% increase risk of bone fractures. This study looked at those 50 years of age and older. They were studied for five years. This is the age group most commonly at risk for osteoporosis. In this study, daily SSRI use was found to be associated with a significantly increased risk of falling (2,100% increased) and a lowered bone mineral density of the hip and the spine. All of these effects were dose dependant, meaning the longer you took the medications, the more problems you may have with them.

Prescribing anti-depressants to the vast majority of patients is futile, as the drugs have little or no impact at all, according to researchers.

Almost 50 clinical trials were reviewed by psychologists from the University of Hull who found that new-generation anti-depressants worked no better than a placebo – a dummy pill – for mildly depressed patients. (The drugs included fluoxetine (Prozac), venlafaxine (Efexor), and Paroxetine (Seroxat)) Even the trials that suggested some clinical benefit for the most severely depressed patients did not produce convincing evidence. Professor Irving Kirsch from the university’s psychology department said: “The difference in improvement between patients taking placebos and patients taking anti-depressants is not very great.

“This means that depressed people can improve without chemical treatments. Given these results, there seems little reason to prescribe anti-depressant medication to any but the most severely depressed patients.”

Alison Cobb, policy officer at mental health charity Mind is urging GPs to consider alternative therapies such as exercise – particularly outdoor exercise – which has shown to be very effective in combating depression.

They include such common over-the-counter brands as Benadryl, Dramamine, Excedrin PM, Nytol, Sominex, Tylenol PM, and Unisom. Other anticholinergic drugs, such as Paxil, Detrol, Demerol and Elavil are available only by prescription.

Physorg July 13, 2010 reports: “Researchers … conducted a six-year observational study, evaluating 1,652 Indianapolis area African-Americans over the age of 70 who had normal cognitive function when the study began … ‘Taking one anticholinergic significantly increased an individual’s risk of developing mild cognitive impairment and taking two of these drugs doubled this risk.'”