This post describes in more detail the research and clinical findings of the three electro-medicine devices reported in Vitamin Electron that were researched and developed by Bob Beck DSc.   How to make or obtain these devices is given below.

Applying small micro-currents to the brain containing select frequencies has the effect of normalizing the release of our natural neurotransmitters involved in pain control, memory, mood and sleep.  (The release of these is inhibited by stress).   The micro-currents can be applied via conductive ear-clips.  It is reported that 95% of those with stress related imbalances (anxiety, insomnia, addictions and depression) experienced a complete reversal of their symptoms in less than a month of daily use of this type of device for 20-40 minutes.  Research with Beck’s Brain Tuner gained attention in two books published in the 90’s: Mega Brain Power, by Michael Hutchison and Super-Learning 2000 by Sheila Ostrander & Lynn Schroeder.  (Beck won the Fetzer foundation pioneering award in 1990 for his work in brain research in the 1980’s. The culmination of this research was the development of the Brain Tuner, a cranial, electro-stimulation (CES) unit.)   Suggested ‘dosage’: a 20-minute session, 1-2X/day for 1 month. Maintenance is 1-2 sessions per month.
Our many neurotransmitters are stimulated at specific frequencies. For example Beta-endorphins (which are 100X more powerful than morphine) are stimulated between 90-111 Hz.  The Brain Tuner is designed as a frequency provider.  It generates a wide range of frequencies deemed effective by research in bioelectric medicine.  The Brain Tuner produces many frequency harmonics simultaneously which, according to Beck, contain “all known beneficial frequencies for the stimulation of the brain’s natural neurotransmitters.”  Some frequencies are also known to simulate tissue regrowth where the blood cells have been shown to undifferentiate (essentially forming stem cells) and then differentiate to regrow damaged tissue.
Studies are still ongoing in many of these areas, but people are noticing marked improvements in the treatment of ADD, phobias, and addictions (including prescription drug addiction), and memory loss.
Anxiety reduction is usually felt during the first treatment and the effects are cumulative. Depression and insomnia are usually controlled, if not resolved, in two to three weeks.  Typically, individuals will report a range of improvements.  Most often reported….

Most individuals describe focused deep relaxation, even when high emotional tension or stress have been present. Following the initial 2 to 4 week application routine, many individuals experience significant positive changes in their outlook and in their relationships with others. Many users experience better mental clarity and feelings of improved self-esteem.

Concerning addictions, it seems that when a person turns to drugs, the body — or brain — ceases making some of its own neurotransmitters, for example, its own pain-killers called endorphins.  Putting a weak electromagnetic signal into the body, especially the head area, stimulates the brain into producing its own neurotransmitters again, including endorphins.  Amazingly, the craving for the drug disappears in three to ten days and without withdrawal symptoms.

A discovery in the early 1990s, showed that blood that was removed from the body and ‘electrified’ with a very small alternating current, made the blood cells impervious to microbes.

Electrodes are held on the wrist over the pulse points.

US patent 5,188,738 was filed in 1993 by the same author reporting efficacy against HIV.  It appears that the goal was to decontaminate donor blood.  Only 50 to 100 micro amperes were needed to accomplish this result.   The implications of this discovery were huge….and were supposedly suppressed.
Bob Beck DSc, a physicist and inventor himself attempted to duplicate these results without removing the blood from the body.  He devised a way to ‘electrify’ the blood by using narrow conductive electrodes covered with cotton placed external to the body where the arteries came closest to the surface.  (The placement is determined by feeling for the pulses then aligning the electrode over that artery.)   The device uses a 9V battery which is amplified to 27 V  to get through several layers of cells to deliver 50 micro-amperes to the blood.
Darkfield microscopy shows that blood electrification resolves rouleaux – an inflammatory state of red blood cells that causes them to stick to each other like a roll of coins.  This state greatly reduces nutrient and O2 delivery.   After gentle blood electrification the red blood cells separate resulting in better circulation thus better delivery of nutrients.  Fibrin levels also decrease.  It has also been shown that levels of interferon and several interleukins increase after blood electrification.  Some of  these effects are also observed with anti-oxidants and enzymes.  Since many diseases like diabetes and cancer are associated with oxidative damage, it is not surprising that blood electrification has already shown promise in reversing these.
The authors of the original patent did not claim/prove that the microbes in the blood were being killed by this treatment so this device is not considered a ‘zapper’ (after Rife or Clark), rather, they claim that the blood cells appeared to become impervious to penetration by the virus.  It is as if the  blood electrification energized or fortified the cell walls.  So as long as the blood cells were ‘fortified’ by the anti-oxidant-like effect of the electrons, then viruses could not enter the cell.  Once the treatment stops, the blood cells may again become vulnerable after a period of time.  And the treatment should be repeated. 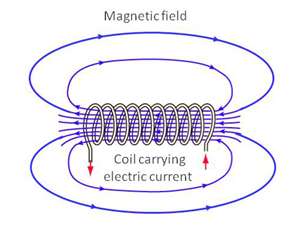 A current through a coiled wire creates a magnetic field with a north and south ‘pole’. As the current changes, so does the magnetic field.

Many are familiar with the use of magnets for healing.  The PEMF is a ‘pulsed’ electromagnetic field.  That is, the strength of the magnet increases and then decreases in a pulse-like fashion.  Patent 5743844 states, “Pulsed electromagnetic fields (PEMF) are low-energy, time-varying magnetic fields that are useful for treating therapeutically resistant problems of the musculoskeletal system. Those problems include spinal fusion, un-united fractures, failed arthrodeses, osteonecrosis, and chronic refractory tendonitis, decubitus ulcers and ligament, tendon injuries, osteoporosis, and Charcot foot.”  The FDA has even recognized its efficacy and has ‘cleared’ PEMF for fusing broken bones, depression, and post-operative pain and swelling.  Darkfield microscopy shows that PEMF also resolves rouleaux – the tendency of red blood cells to clump together like a roll of coins.  After a PEMF session the red blood cells separate resulting in better circulation and better delivery of nutrients.

PEMF is said to act like a cell charger by creating an intense voltage around each cell which the cell stores.   Darkfield microscopy shows this increased energy (brightness) around the blood cells after PEMF treatment and is given as the reason cell walls are pathogen resistant – from ‘energetic immunity’.  PubMed lists over 2500 studies on PEMF.  It has been shown to:

Clinically PEMF has been shown to:

Case studies show application of PEMF helpful in Parkinson’s and stroke even after 7 years of paralysis.

NOTE: The PEMF devices should not be activated near computers, credit cards, cell phones and other magnetically imprinted materials.

Dr Beck wrote out all his instructions in his book A First Aid Kit of the Future: The Beck Protocol. Here is Part 1, Part 2, and Part 3 which describe the patents, magazine articles, making the devices,  the protocols and the results.  (I differ on his view of destroying microbes and have a different understanding of how these work in the body as described elsewhere.)   His devices can be made fairly cheaply.   Several companies make these for the electronically impaired.   (But I have a physics degree and a masters in electrical engineering and decided not to tackle the components and soldering gun but rather to find the already working and tested units commercially available.)  Please contact me privately below for commercially available units since the manufacturers of these units wish to remain separate from information regarding how some people use these units….since results may vary.

Nutritional support while micropulsing would include high-powered anti-oxidants like Brain Protex  which is a blend of potent anti-oxidants which can cross the blood brain barrier,  Grapine HP and Super ORAC , 2 of each 2X/day.  (This comes from my experience testing folks who have started micropulsing).