Kombucha is a fermented black tea, Jun is a fermented green tea.  Each require their own culture or starter which looks like a white rubbery pancake, called a SCOBY (Symbiotic Colony Of Bacteria and Yeast).  The SCOBY pancake transforms sweetened black or green tea into a slightly carbonated, slightly alcoholic drink of health giving acids and nutrients such as glucuronic acid, glucon acid, lactic acid, B-vitamins, amino acids, probiotic substances, and other products.   The SCOBY is therefore, a biochemical factory (similar in function but different in shape to kefir grains).  The alcohol production by the yeasts in the SCOBY contribute to the production of acetic acid (type of acid in vinegar) by the bacteria in the SCOBY.  Other acids produced include butyric acid, malic acid, oxalic acid and usnic acid.   Many of these acids play an important role in rebalancing the pH, thus, the effectiveness of enzymes, and, the population of microbes in the gut.  Kombucha and Jun’s low pH provides many of the same benefits seen with the Apple Cider Vinegar therapy with the added benefits of being a probiotic, having the antioxidant benefit of tea and not being inflammatory to some blood types.

What is it supposed to do for me?

A thousand Kombucha tea drinkers were surveyed regarding the benefits they noticed when drinking the tea.

About Green and Black Teas

Both black and green teas come from the Camellia sinensis plant.  Green teas are just ‘withered’ which is a type of drying that removes most of the moisture.  Green tea leaves retain their green color and as a result green tea is loaded with the compound epigallocatechin gallate (EGCg), a powerful anti-oxidant.  Green Tea is beneficial for all blood types.
Black teas are processed a step further and are aged under temperature and humidity conditions that allow some aerobic fermentation.  The controlled aging process converts EGCg into other beneficial compounds which possess at least the same antioxidant potency as catechins present in green tea.  Many beneficial flavonoids are also produced during the darkening process.  Although black tea is an ‘avoid’ for most blood types, the action of the SCOBY on the tea may affect that status.

Jun is made in a similar way, using a SCOBY that has developed on green tea and honey. 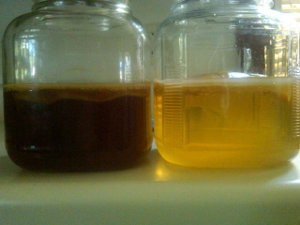 Regular black tea Kombucha on the left; green tea on the right.

Bring 1/2 gallon of filtered water to ~ 167 deg F (well below boiling).  I use a thermometer with an alarm set at 167 deg.  Remove from the heat and add 3-4 bags organic green tea.
Allow to cool and add 1/2 cup raw unpasteurized organic honey.  Dissolve and add this sweetened green tea to a glass culturing container and add the SCOBY,  submerging well to release any captured air.  You can also include some of the last batch of cultured green tea to lower the pH and avoid some kinds of aerobic microbial action that affects the taste of the end product.  Cover and set aside as done with the standard black tea Kombucha.  ‘Done’ is determined by your tastes.  Some like their Jun still a little sweet, others prefer the tartness of the lactic acid and lots of fizz.  You can insert a straw and taste your Jun to determine when in the culturing process it comes to your liking.

After the culturing process is ‘done’, as described above, the end product can be enriched, either in therapeutics or flavor by bottling the cultured tea, adding something, capping tightly, and allowing it to sit at room temperature for another 3-4 days before refrigeration.  The additions can be pieces of fruit or veggie or ginger (about 1 tablespoon/pint).  Juices can also be added such as beet, tart cherry, elderberry, etc.  These have natural sugars which feed the fermentation producing a delightful effervescence in securely capped sturdy bottles.  Some have reported pressure build up sufficient to explode a bottle so take care not to ignore your culturing products.

6 Responses to Kombucha and Jun Tea