German New Medicine (GNM) contributes immensely to our efforts of finding the nature of the stressor that erodes our health.  Dr. Hamer has correlated tens of thousands of cases to also show the repeatability of his findings.  And the English GNM website is attempting to compile even more.  As one who has analyzed data looking for clues, specific information and trends I appreciate Dr. Hamer’s contribution to mankind.

Before introducing this concept in a user friendly way, I need to comment on GNM in general.  If you watch the GNM videos you will notice often references to evolution.  I am a staunch creationist.  Dr. Hamer’s work is not based on evolution but evolution is employed to explain germ layer development.  He could have simply and solely used embryo development – and he does to some extent.  He also uses evolution to explain the social development of man as do many theories in psychology.  I feel neither assumption minimizes his findings.   ‘Collecting data’ and ‘interpreting the data’ are two separate endeavors.   His greatest contribution in my opinion is the hard and fast link from stress to tissue damage and functional impairment.  Repeatable data is science enough.  It begs interpretation but interpretations of the same data can vary based on belief system. 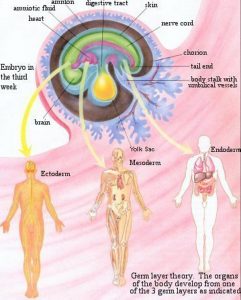 Our body developed through cellular division into specialized cells.  The three major categories of these cells are the endoderm, or innermost layer (wait, I’m almost done), the mesoderm, or middle layer, and the ectoderm or outermost linings of everything, each layer being controlled by specific parts of the brain.  Dr Hamer proved via CT scans and interviews what kinds of stresses affect what kinds of cells and determined what kinds of healing paths each group of cells take, including what kinds of cancers or diseases will eventually manifest if the stress is unresolved.  The table at the bottom of this post gives a brief summary of his organization of tissue damage and related stressor but first you’ll need to understand some terminology.

An explanation of GNM metaphors: Morsels, Territories and Packs

Dr Hamer made extensive use of metaphors in explaining the stressors by using our language idioms –  which is also rich in metaphors relating to the body.
The ‘morsel’ conflicts basically characterize how we handle what life throws at us, that is, unexpected traumas, accidents, bills, deadlines, moves, severed relationships that are a BIG deal and for which we feel unprepared – or totally blindsided.  Basically BIG BAD NEWS.  Examples would be a sudden job loss, financial loss or treacherous betrayal, or accidental death of a close person.   These are called ‘morsels’ in GNM and ‘morsel conflicts’ affect our digestive path (endoderm).  For example, when a life situation (morsel) comes at us, can we ‘grasp’ it, or ‘get a hold of’ it (mouth), ‘swallow’ it (throat, esophagus),  ‘break it down into pieces, or a size we can manage’ (stomach),  ‘separate the good from the bad’ and ‘learn our lesson’  (small intestines), and ‘forgive and let it go’ (large intestine/rectum).

Our language often shows where our ‘morsel’ is when we say things like, “I don’t get it”, or “can’t get over it”, “..handle it”, “…let it go”, “…get past it”, etc.  The ‘it’ is your morsel, and, where you are stuck in your processing of that ‘it’ helps determine where your tissues are being affected.  There is usually anger associated with this inability which Dr Hamer calls indigestible anger.  The remedy that GNM offers is life counseling to help you to come to terms with your morsel and so your body can begin the healing process.

The ‘attack’ or ‘soiled’ conflicts are from actual or perceived attacks with objects or words like threats.  The ‘attack’ conflicts affect the deep skin and membranes inside the body that function as our protective layers.  These conflicts are sudden and unexpected verbal assaults or physical (even surgical) assaults IF your body perceives it is, or will soon be, attacked.  The target may be your physical body OR your psyche, or reputation.
The ‘soiled’ conflict would be a perception of being defiled – touched by something that dirtied or tarnished you.  The mesoderm tissues are affected by ‘attack’ and ‘soiled’ conflicts.

The ‘self-devaluation’ conflicts (SDCs) occur with chronic negative thoughts about ourselves.  The thoughts about ourselves may have been adopted in a childhood trauma, or repeated adult remarks about our abilities (or lack thereof) and these unfortunate conclusions that we owned, repeat within our psyche.  In a sense we are attacking ourselves.  So, “I’m slow”,  “can’t run as fast…”, “I’m useless”, “not as pretty as…” are health eroding statements.   The tissue impacted by ‘light’ SDCs are the lymph nodes, tendons, blood vessels, and ‘severe’ SDCs impact deeply into the bones.  These often have the component “I’m not able to…”  The tissues affected are part of the mesoderm.  Common joint problems and their GNM associated conflicts are in this table.

The ‘territory’ conflicts constitute a violation of our territory – our possessions, authority, position, or responsibilities.  We want to feel secure in/on our turf.  A territorial conflict would comprise a sudden loss of any of these, or a violation of these, or an inability to ‘mark’ our territory to prevent encroachment.  An example would be if someone were suddenly and unexpectedly assigned one of our responsibilities at work.  This would be a territorial loss.  If we were threatened, that would be territorial fear/insecurity.  Or our neighbor’s loud music may be a territorial infringement.  And our failed attempts to reason with them to turn down the music may be an inability to ‘mark’ (possess/control) our territory.  We all have things we consider ‘our turf’ and when our ability to possess or control them is challenged, specific tissues are affected especially if there is associated anger or outrage.  These conflicts affect the ectoderm, meaning the mucosal and serous linings (ulcers), the epidermis (outer skin), the linings of ducts and vasculars.

The ‘pack’ conflicts characterize our relationships with others in our ‘pack’ – our family, extended family, professional associations, sorority or whatever we consider our ‘pack’ – the herd we rely on in a survival or some emotional sense.  These kinds of conflicts include mating conflicts, nurturing conflicts, and most commonly separation conflicts.

One final concept GNM uses is that of ‘tracks’.  The original conflict causing the disease/dysfunction was UNEXPECTED, that is, you were SHOCKED and caught off-guard at that moment (and usually as a child).  That initial hit makes you vulnerable to the SAME kind of stressors occurring over and over again.  When these themes reoccur from time to time they are called your ‘tracks’.

The Issue and the Tissue

So how can you use this information?  Some examples.

A common conflict is the ‘indigestible morsel’ conflict which means that at some point, usually when you were very young, you experienced a sudden survival conflict from perceiving you were not able to perform a survival task, or, process a life event (e.g. loss of parent/sibling) creating a sense of overwhelm and ‘cannot handle that’, ‘can’t get over that’, ‘too much for me’, ‘I can’t make it’.  This often creates an ‘indigestible anger’ which flares when this kind of event is presented to you again.  Once you react to this present scenario, your tissue (usually digestive) automatically goes into a special biological program to help ‘digest the morsel’.  We typically call that program ‘disease’.  Resolution of the conflict, begins another special biological program to return the body to normal.  We call that process a ‘disease’ too.  Dr. Hamer proved that these are natural bodily responses to specific conflicts and emphasizes resolving the conflict (not fighting the disease)  I agree, which is why I wrote my book to help folks start resolving some of these common-to-man conflicts.

Another scenario often presented at a young age is the sudden self-devaluation conflict (SDC) which is a sudden loss of self-worth from an unfair remark, being put down, failing, or when we feel unsupported. ‘I am useless’ – can trigger a loss of self-confidence or a humiliation.
Relatively small SDC’s affect blood vessels, connective tissue.  Moderate SDC’s affect cartilage, and lymph nodes.  Major SDC’s affect bones leading to arthritis (see ‘joint’ table above).  The bottom line is to resolve as many instances in your history where you were made fun of for a specific reason.

You can study GNM as I have, but I’m a nerd and enjoy studying.  If you are very sick you won’t have this interest.  All you need to do is begin resolving as many instances in your life where you suffered unexpected news or traumas and come to terms with those events in a new way, with a new perspective, making sure to forgive all offenders.  My book is a self-help guide to show you how to invite God’s perspective, if you need any direction in that effort.

5 Responses to Using GNM to Find Origins of Stressors