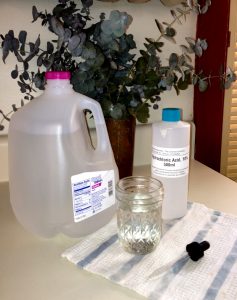 Hydrochloric Acid is an important ingredient needed for the health of the body.

Increasing the amount of Hydrochloric Acid in the body by various means (oral, topical, intravenous and intramuscular) had been used very successfully in the 1920’s and 1930’s for a variety of lymph stasis diseases including infection, tissue degeneration and cancer.  Dr. Burr Ferguson and Dr. Walter Bryant Guy pioneered the use of this therapy and reported their results in a periodical, open to ‘alternative’ approaches, called The Medical World.  When Dr. Ferguson began treating many kinds of bacterial infections successfully with intravenous infusion of 10cc of 1 in 1000 hydrochloric acid, he tried to publish his findings, but in professional circles, little interest was shown in this cheap effective cure.

(The reader must understand that cheap effective cures compete with money making drugs and the livelihood of many, so the info is often suppressed or the remedy maligned.  This efficacy of this remedy was slowly passed around by word-of-mouth, and now quickly via the internet.  Dr. Ferguson was approached by a large pharmaceutical company and offered a large sum of money to cease his efforts to present his results to the medical community.  This background info is to preempt this question:  “Well if  Hydrochloric Acid Therapy is so effective, why isn’t everyone using it?  Or, why haven’t I heard of it?”  Simply put, for financial reasons this remedy, like many others, is maligned or banned or ignored by the medical establishment.)

Hydrochloric Acid is an important natural constituent of the body.

From his many experiences Dr. Guy formulated a theory that most disease conditions, acute infections, anemias, metabolic disturbances and malignant cell overgrowths are the direct result of blockage of the lymph channels.  Dr. Ferguson found that intravenous injections of dilute Hydrochloric Acid stimulated phagocytosis which cleaned up the stagnant lymph pond of the body and produced spectacular recoveries from apparently hopeless cases without harming the patient!!  Case histories of successful cures include cancer (brain, prostate, skin, and colon), tumors or growths, pulmonary tuberculosis, convulsions, chronic bronchitis, migraines, tonsillitis, pneumonia, malaria, acne, bed sores, elephantiasis, and so on.  Many of these, including cancer are a result of long-standing congested lymph channels.  The result is a reduced nutrient supply to the involved tissues (resulting in lowered function and even localized necrosis and resultant infection), and accumulation of cellular wastes (resulting in swelling, weight gain and the formation of cysts or tumors and cancer).  Analysis of blood samples after diluted Hydrochloric Acid injections showed that blood oxygen levels increased drastically, increases in red blood cell and white cell counts, increased phagocytosis (removal of dead tissue, and other debris) all of which resulted in the cure of the disease.  More documentation is preserved in this pdf entitled Three Years of HCl Therapy.

Some quotes of interest

Dr Guy writes, “The world is in sore need of a reliable, effective remedy for cancer and tuberculosis, also a preventive treatment. The writer does not claim that he has a perfected remedy, but he does claim, by repeated proofs, that this [Hydrochloric Acid] solution contains in itself an ability to promptly cause many precancerous lesions to disappear, that cancerous conditions of the internal organs, where other methods are so futile, are and have been dissipated, and that in cases too far advanced for recovery, relief of pain and distress is so marked that such patients believe they will entirely recover.”

“The [Hydrochloric Acid] solution has been proved by the writer to be an effective and curative remedy in many cases of cancerous growths; also it points the way to the etiology of cancer and how cancer may be avoided.”

“It has curative properties in diabetes, tuberculosis and other degenerative diseases.”

So why are people deficient in HCl?  Dr. Guy reports, “What, then, are the causes of its disappearance in the gastric fluid, following eating of food? First, Prof. Austin (author of Manual of Clinical Chemistry) says most conclusively that “hydrochloric acid secretion may be completely suppressed by emotion or worry.””   So addressing this basic cause is found here.

I guess doctors Guy and Ferguson wouldn’t think too highly of our acid-blocker therapies like Prilosec, Zantac and Nexium, etc.  Their conclusions seem to implicate such therapies as promoting cancer and degenerative disease.

Applications of Hydrochloric Acid therapy consistent with traditional naturopathy are the oral administration used by Dr. Guy et al. and the topical administrations used and reported by many doctors of that time and outlined in the above document and summarized below.  Rectal implants have recently come into use and are also very effective.

But don’t worry about exact percentages.  As a guide for you, I can comfortably sip on 15 drops of my 10% HCl in 1/2 cup of water (about 1:500).   That strength would correspond to about 4 drops of the 35% HCl, or 30 drops of the 5% HCl, or about 50 drops of Dr. Guy’s 3% in the same amount of water.  One poster below uses 10 drops of his 35% HCl in a full glass of water which he measures has a pH above 4, which is less acidic than lemon juice or vinegar or apples.  If this whole idea makes you nervous (as it did me at first), begin with 1 drop in 1 cup of water, stir with a non-metallic utensil (I use the eye dropper) and sip.  Increase by one drop at a time and sample until it is to your liking.  I encourage you to write down your findings or ask questions by posting below.

You should use distilled water but set the water out overnight in a warm environment uncovered to allow some of the soluble volatiles to escape.  (This is why the pH of purchased distilled water is greater than 7 when just opened.  Volatile substances that evaporate before water in the distilling process are often captured and redissolved in the distillate if not allowed to exit first.  This is quickly eliminated by boiling your distilled water uncovered for a minute or so.)  You shouldn’t use water with lots of dissolved solids in it as the HCl may react with those and lessen its therapeutic value.

These number of drops can be put into a comfortable amount of water and sipped throughout the day.  When taken orally HCl contributes to improved breakdown of protein products in the small intestine, which reduces hunger and helps with blood sugar regulation.  Then it is absorbed into the lymph system where it clears up cellular debris in the channels back to the circulation.  The portal vein will carry HCl from the digestion to the liver where it can relieve lymphatic congestion there.  HCl has an affinity for the lymph channels where it breaks down proteins (hydrolysis) that clog the lymph!!!  Remember, worry suppresses our own production of HCl.

The medical doctors using HCl therapy so successfully began adding mineral chlorides and then used the term ‘mineral acids’ because they found that the addition of other mineral chlorides gave better results.  One such additive which is easily available to all, and the most well-spoken of is Potassium Chloride (KCl).  The herbalist John Christopher echoed their findings saying that cancer, tumors and cysts cannot exist in a body well-supplied with potassium.  KCl is a salt substitute found in most grocery stores under the name Nu-Salt or No-Salt.  Read the label.  You can add 1/8 teaspoon to 1 cup water to which your HCl was added.

Topical applications of the HCl were done at the 1:500 and 1:250 dilution. These were swabbed into orifices to successfully resolve itching ears, nose sores/polyps and skin epitheliomas. Fomentations (bandage soaked in dilute HCl and applied) were made for burns and reportedly stopped the pain immediately. These solutions were also sprayed onto the skin to resolve boils, skin ulcerations or other lymphatic congestion and in the sinuses to relieve congestion (I’ve not tried this- may sting).  Dilute HCl was considered a very effective antiseptic as these applications were typically used to address infections or to avoid infection in the cases of burns. You can make this yourself.
First, stock lab concentrations of HCl are about 35% concentration.  A 1:500 dilution would be about a .07% and a 1:250 would be a .15% dilution.
To make a cup (236 ml) of the 1:500 strength (.07%) from a 10 % HCl solution.  (Using the dilution rule)
10% x Vol HCl = .07% ( 236 ml H20 + Vol HCl )
9.93 Vol HCl = 16.52
Vol HCl = 1.66 ml

Using the accepted conversion of 20 drops per ml, that would be 33 drops of 10% HCl in one cup (236 ml) of distilled water to make the 1:500 topical dilution. To make the stronger 1:250 dilution, double the amount of drops in the same amount of distilled water, or, use the same amount of 10% HCl drops in 1/2 cup water. Remember that Hydrochloric Acid even though very dilute, will react with metals so avoid contact with metal containers, utensils, measuring devices or jewelry. 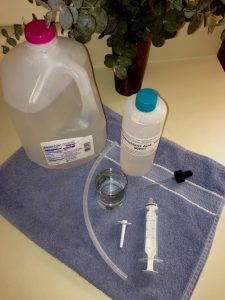 HCl may be dosed rectally using a common syringe (20 cc), a tip designed for that purpose, OR a short length of polyethylene tubing (3/16ID, 5/16 OD) which can fit on the end of the syringe. Cut tubing to a 4-5 inch length and soften the end to be inserted using heat. (I used a grill lighter flame for a few seconds and molded the end.

The ‘whats’ and ‘hows’ of retention enemas or implants, is described in detail in this post.   Basically this is a dilution of HCl that is inserted rectally and held until it is absorbed by those tissues.  One poster (below) uses 3-4 drops of his 35% HCl in about 4 teaspoons (20 cc) of distilled water and uses a rectal syringe to administer that small amount.  He credits this practice with putting his leukemia in remission.  So 3 drops of 35% HCl would correspond to 10 drops of 10% HCl or 20 drops of 5% HCl in the same amount of water.  To begin you should try a lower dosage to make sure it is comfortable.

The HCl is absorbed by the protal vein and goes to the liver where it improves any lymphatic stagnation in that area.  It also enters the lymph system of the lower pelvic cavity, breaking any large proteins that are clogging the lymph flow up the main return.